The Thracians
an exhibition about their history and treasures

Apart from what little we are told by Homer in the Iliad or Herodotus or Plutarch, not enough is known about the Thracians to understand the mysteries surrounding the origins of this people about which certain aspects are still obscure.

We know of the enterprises of Spartacus which became history because in 72 BC he organised the biggest slave revolt ever, and we know that the Thracians were among the protagonists of the Trojan war in 1150 BC. Evidence of their presence appeared in the first stratum of this city made famous by the Iliad. If we go back in time we step into the legend and move increasingly towards mythology.

This exhibition, in the Santa Croce cloisters in Florence until 11th January 1998, makes an enormous contribution regarding knowledge of this people. Entitled "Glorie di Tracia", it is a real treasure, not only in archeological terms, and features over 3,000 pieces displayed in around fifty glasscases, including finds lent by the museums in Bulgaria for the first time.

Among these is the treasure of Trebeniste, thirty highly precious pieces in gold, silver and bronze. One of the outstanding items is a funeral mask and glove worked in gold leaf by master goldsmiths. 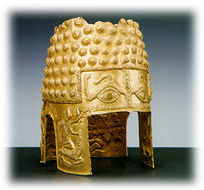 The finds that are most striking are those from Valcitran dating back to the period of the Trojan wars: thirteen gold pieces including goblets, various worked lids, a cantharus weighing almost 4.5 kilos and a beautiful container divided into three parts decorated with grooves and weighing 12 kilos in gold. This priceless treasure demonstrates the skill of the Thracian tribes in gold metalworking, lost in the legend of King Midas and the Thracian tribe of the Phrygians.

Five thousand years of history and art are represented by everyday crockery and statuettes depicting the Earth Goddess, hatchets which symbolised the power of the king-priests, suits of armour and weapons, coins and jewels.This display of art, archeology and history, which provides a better understanding of our origins, is well worth a visit.