An anniversary
that ought not to be "celebrated"

November 4th will mark the thirtieth anniversary of the flood that ravaged Florence in 1966. Like every anniversary, this one is going to be celebrated too. A great many events, such as conventions, meetings, concerts and exhibitions, are being organized. We have published an exhibition of photographs, interviews and accounts on these pages as well.

However none of these things are meant to actually "celebrate" the event. How can we celebrate such a dramatic event as this, which was to cause deaths, destroy works of art, leave fifty thousand families homeless, wipe out six thousand shops out of ten, and reveal the impotence and ineptitude of the governmental apparatus. These pages are "to remember". 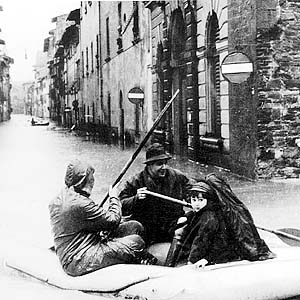 To remember above all the Florentines, who lived through the disaster in person and in a direct manner; who removed the mud with buckets, their hand{ and anything they could find, until, six days after the flood, the mechanical scrapers finally arrived. To remember that now, thirty years later, Florence is more at risk than ever; the damage would be far worse but, perhaps, at least, the scrapers would be brought in sooner. To remember all those who helped the city of Florence in the enormous job of reconstruction.

That is why we have made our appeal to the mud angels. If there is anything that should be celebrated, it should be that huge wave of solidarity that was, after the floodwaters, to overwhelm Florence. And we have not forgotten.